Coffee Vs Tea. It’s a risqué if not foolish clash to stage within the pages of a coffee aficionado’s magazine. Even as I write this I can almost hear the readership majority inevitably affirming, ‘There is no competition!’ – to which I must subscribe. Not because coffee is the clear winner – just that there is no competition. A debate engaging wine Vs beer or coriander Vs basil, would be a waste of time because of one’s subjectivity or mood. Sometimes a glass of wine would be nice, other times it’s got to be a beer. Coriander on my curry please and basil with my pasta.

31 years ago, I started my working life as a trainee tea and coffee taster, working in the quality assurance department of a large coffee roasting and tea blending business in the north of England. The opportunities that came my way lead me to major in coffee where ultimately, I became Head of Coffee and oversaw buying, quality and product development. I became a social auditor and examined and helped improve conditions for workers on farms throughout the coffee world. I became a Q Grader coffee taster(Q Grading being the most respected coffee tasting professional qualification of our trade) and soon I hope to qualify as a Q Grader instructor and aim to train coffee tasters all over Europe – and beyond. In 2012 I took on a new challenge when my old friend and CEO of Falcon Coffees, Konrad Brits, asked me to set up and run Falcon Speciality (green coffee importers) and have spent much of that time cupping with hundreds of micro-roasters. I’m a coffee man through and through.

My time with coffee has been like a solid marriage but I have often fantasized about the leaf as I think back to my days of tasting incredible Darjeeling, oolongs and Uva Highland Ceylon teas. In recent times I have taken things further by embarking upon an affair and buying a share of a business that sources fine, rare and organic teas – Storm Tea in Newcastle. So now I’m wearing a coffee and a tea hat and origin trips include Sri Lanka, India and China.

Coffee Vs Tea. I can’t get away from this debate, this chance for these hot (and sometimes cold brewed) beverages to cross swords. Right now, coffee is the winner – the coolest and sexiest drink on our planet with a dedicated army of baristas and followers full of genuine passion and drive.  During the last five years whilst working with Falcon I’ve been hanging out in artisan cafes all over Europe and it’s as obvious as snow – coffee is where it’s at!  On many occasions I have witnessed the barista agonising over every aspect of his/her coffee preparation – the grind, temperature, the water, beautifully textured milk, all whilst wowing the customer with in-depth coffee knowledge… ‘Jose Gonzalez is a third-generation farmer at La Vista Bonita in Colombia and has been experimenting with a macerated natural process using only bourbon and Pacamara varieties’. They break off to hurl a tea bag in a mug for one of the customers who chose tea before applying beautiful latte art to their espresso canvass through the medium of hot milk. Of course, there are exceptions to this scene where tea receives much greater respect but I am perplexed that coffee can be given so much love, care and attention whilst tea, our national drink in the UK, is all too often treated like a necessary but inconvenient bolt-on. And yet they share so many similarities and areas of interest - I would argue in equal measure.

Coffee and tea both share rich histories and myths. Coffee’s Kaldi, the Ethiopian goatherd, was inspired by his cherry eating and caffeine addled goats and so also ate the bright red coffee cherries to help stay awake during prayers. Tea’s alleged founder is Emperor Shen Nung of China - banished by his people for his cruel ways, he sought solace in a rural and faraway place under the shade of a tree whose leaves would occasionally fall into his drinking water as he boiled it on a fire. The drink’s calming effect, which he called Cha meaning peace, caused him to relent and find inner peace and he later returned to his role and ruled as an excellent and much-loved leader. His gift to the people was cha – or tea.

The terroir of tea is every much as fascinating as coffee with altitude, climate, soil and rain all having the same kinds of impact on the final flavour. Tea is hardier than coffee and will grow beyond the tropics since it is able to withstand lower temperatures. Varieties in tea fall into three categories; Camellia Sinensis, Assamica and Cambodiensis but many cultivars and selections have been created from these, leading to a wide biological range of teas, each with its own properties and flavours.

It is widely understood by most baristas and many consumers of specialty coffee that the processing of freshly picked coffee cherries has a major impact on the ultimate cup profile. The clarity of washed coffees where the skins and pulps are removed prior to the fermentation and washing stages is in sharp contrast to the sweet and sometimes luscious, boozy flavours that are derived from the natural ‘dried in the fruit’ process. Naturals are loved for their full-on funky flavours whilst honey processed coffees – created from the beans of freshly pulped cherries that are dried in their sticky mucilage - bring about a midway point that captures good acidity with some of the fruity notes of a natural but in greater balance. The opportunities to manipulate the final flavours of tea through various processing techniques, are perhaps even more varied than coffee. Variations to the processing of freshly picked tea leaves allows for a categorisation sometimes known as ‘the family of teas’; White, yellow, green, oolong and black. Each process is an adaptation on the amount of time that partly dried and crushed tea leaves are allowed to react with oxygen before a final drying or ‘fixing’ stage known as firing. These processes can bring about flavours that range from delicate to floral, fruity, vegetal, brisk, rich, smoky, earthy and so on. A Chinese speciality called Pu Erh, named after the region of its origin, is created by compressing processed tea leaves into circular cakes and storing them for several years. During this time a slow and gentle fermentation takes place bringing about honeyed and dried fruit flavours.

Provenance has become extremely important in the world of coffee. Nowadays a customer enjoying a good specialty coffee is likely to have access to all kinds of details about their beans that go a lot further than the name of the country where they were grown. In specialty coffee shops it is likely that the customer can be told (if they are interested) the region of the country the coffee comes from, the name of the farm and the farmer, the altitude, the variety, the way it was processed, the roasting style and some good flavour notes. Very specialised tea shops may offer similar information but all too often very few details of provenance are shared, perhaps as little as… Darjeeling, China Green, Ceylon or simply… English Breakfast. An importer of good teas has access to the same level of information as the coffee importer so why not share it?

A few advantages that tea has over coffee include its excellent shelf life. If stored correctly a tea can still taste good after two or even three years. Oxygen, coffee’s great enemy, means that we have only two or three weeks before staleness is spoiling the flavour. Furthermore, an imported tea requires much less attention than coffee since the latter is a raw material that requires roasting whereas tea is ready to either blend or simply pack and requires no further processing.

Brewing is perhaps tea’s greatest advantage over coffee because it’s a lot easier to get right and yet remarkably, despite coffee’s challenging demands for brewing precision – it is usually done a lot better than tea. That’s my experience in many cafes of the UK high streets! Coffee is mainly brewed as espresso and with that comes a whole load of possibilities with varying ratios of milk for our cappuccinos, lattes, flat whites etc. and then there’s the pour-over filter, the aeropress, chemex, etc. Good baristas know their coffee/water ratios, temperatures and brew times. Tea is essentially a lot easier to brew since all that is required is a tea pot, hot water and great tea but the tea/ water ratios are crucial as is temperature (which should vary for different types of tea) and brewing times. There a few golden rules such as the need to warm the pot and ensuring everything is clean but these are simple to learn and apply. If a café serves great coffee, there really is no excuse for poorly prepared tea!

So, what is the conclusion of this grand debate? Coffee is sexier than tea, is loved more than tea, is cooler than tea and is simply more popular than tea. As we have already established, coffee is the winner. The Specialty Coffee Association has been highly effective in promoting specialty coffee and running world acclaimed competitions that have been so powerful that they have even created a sub-culture of young hipsters - a world of beards, checked shirts and tattoos depicting coffee cherries and portafilters. But where are tea leaf and tea pot tattoos? 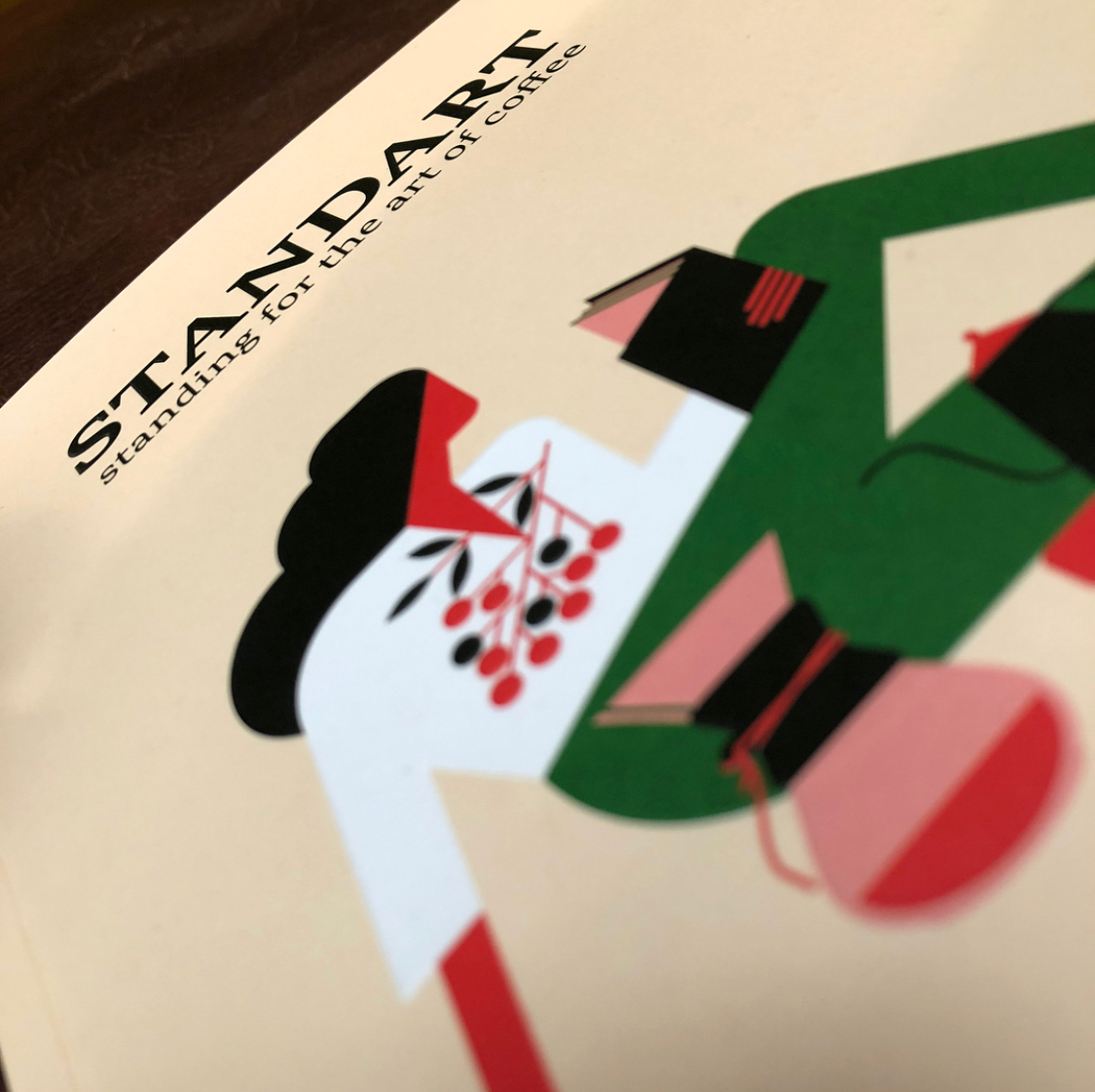